Where Is Maui Hawaii?

Maui is an island in Hawaii, and Hawaii is the 50th state of the United States (see When Did Hawaii Become a State).  Maui and the other islands of Hawaii are in the middle of the north half of the Pacific Ocean.  Maui is 2340 miles west of San Francisco, 2495 miles west of Los Angeles, and 3960 miles east of Tokyo.  Where is Maui relative to the other Hawaiian islands?  It is second from the eastern end of the chain, between Oahu and the Big Island of Hawaii.  Scroll down to see the map below. 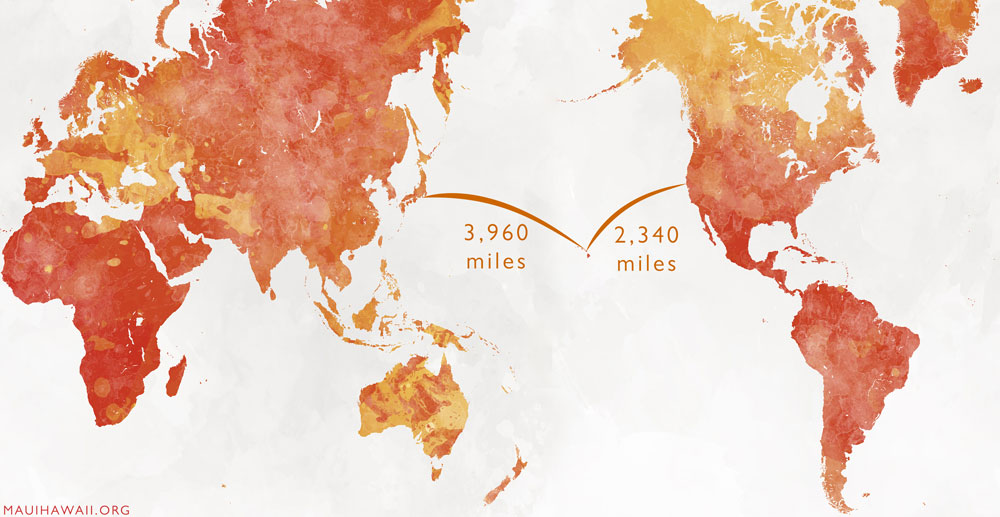 How big is Maui?

Maui is the second-largest Hawaiian island, at 729 square miles (only the Big Island of Hawaii is larger).  Maui is 48 miles wide east to west and 26 miles at its greatest north-south dimension.  The valley between the west and east halves of Maui is about 6 miles by 6 miles.

What is the population of Maui?

There are 127,000 residents on Maui.  On an average day, there are 42,000 tourists.  Where is Maui in population order among the other Hawaiian islands?  It is the second-most populated, after Oahu.

What is Maui’s area code and zip code?

What is the latitude and longitude of Maui?

Here is a link for Maui weather and sunrise-sunset times for each month of the year.

Where Is Maui on a map of the Pacific Ocean area?